The creator of the Labradoodle says he regrets ‘Frankenstein’s monster. Says the breed is his life’s regret’

The inventor of the labradoodle, the ubiquitous, mopheaded designer dog, said that creating the mixed breed was one of his life’s regrets.

“I opened a Pandora box and released a Frankenstein monster,” the creator, Wally Conron, said on the Australian Broadcasting Corporation’s podcast “Sum of All Parts” last week.

Mr. Conron, who has been credited with sparking a crossbreeding frenzy resulting in shih poos, puggles and more, said the labradoodle was originally intended as a guide dog, not a fashion accessory.

“I bred the labradoodle for a blind lady whose husband was allergic to dog hair,” Mr. Conron said, according to the Australian Broadcasting Corporation.
“I’ve done a lot of damage,” Mr. Conron told The Associated Press in 2014. “I’ve created a lot of problems.”

He said that unscrupulous people setting up “horrific” puppy mills, and backyard breeders who were breeding for bucks, were to blame for producing a glut of unstable dogs that would eventually be euthanized.

In an interview with Psychology Today that same year, Mr. Conron acknowledged that the “doodle” name was “a gimmick” that went global.

“People ask me, ‘Aren’t you proud of yourself?’ I tell them: ‘No! Not in the slightest.’ I’ve done so much harm to pure breeding and made many charlatans quite rich,” he said. “I wonder, in my retirement, whether we bred a designer dog — or a disaster!”

“I find that the biggest majority are either crazy or have a hereditary problem,” he said.
Comment by Linda DeBlauw, breeder, Scarlet’s Fancy Poodles –

I am in agreement with Mr. Wally Conron. If you are in question of the article above, Google Wally Conron Labradoodle.

There is a myth that mixed breed dogs are healthier than purebreds? NO it is not at all true. All dogs will only be as good as their parents. Unless both parent’s have been completely tested for all genetic faults present in that breed and they have tested clear of genetic disorders, and have excellent temperaments can you hope to get a puppy that will be without disorders, and have a good temperament.
Linda DeBlauw

According to the American Kennel Club Poodles are the most highly trainable of all canines. That is why they were used in many dog acts and circuses. Well bred Poodles are highly intelligent, energetic, athletic, natural comedians, very loyal, as hypoallergenic as any dog can be, they do not shed, and they have the lovely curly coat that is so sought after by doodle breeders.

One thing all poos and doodles, have in common is that they are part Poodle.

Here are some of the crosses that Wally Conron refers to – 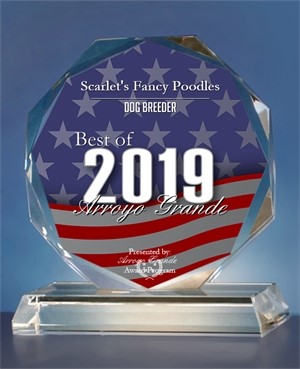